blind film (2018) comprises a series of new media installations involving a real-time composition of the kinetic system and digital interface that attempts to reconfigure familiar subjects that constantly change and repeat in the everyday life but at times come to us like unrefined feelings and traces.

This project has started by looking at a window blind that is commonly seen around. At the moment of coincidentally seeing an instant stripe of light that shines through the room, penetrating a window blind for a short while, the sense of discontinuity and fragmentation left a trace on my body. An unknowable glimpse of light formed a mediating figure between the moment of occurrence and the moment of observation, then collapsed into the recognition of unfixed experience as an open constellation, porous to contingencies.

blind film embraces the capacities of intimacy based on absence, distance, and ruptures of time and space that reconstruct both actual and virtual spaces as well as the viewers, affording a complex sensorial experience by stepping aside from the event to look at it from a temporal distance, and over time.

I used vertical window blinds that are diagonally filled with a two-cornered gallery space. Each window-blind structure consists of multiple blind panels that block a strong white LED light from behind. At times, the bottoms of the window-blind panels are tapped by a motorized rotating stick and a stripe of light leaks out of the gaps between the panels from both partitions to run across the exhibition space. In addition, a thin inverted T- shaped light stripe is projected onto the floor from the ceiling, trifurcating the space. The central vertical line splits the two-cornered spaces with identical window-blind structures and the horizontal line separates the installation space from the viewer’s seating area. This digital projection of static light appears like a tennis court line that demarcates each player’s side and the non-playable area, which belongs to the audience. In a gallery space without interior lighting, the viewer’s vision becomes completely reliant on the lights from the work.

The bifurcation of the gallery space by the identical partition of window blinds that occupy each corner contributes to the expansion of each structure’s incomplete transparency and thus unites and spatialize its architectural narratives. When the stripes of light that come across from the window-blind structures, or multiple stripes at the same time intersect with the projection line on the floor, a momentary crossover occurs between analog and digital sensations. In this meeting, light does not act as a medium for visualized visual communication. Instead, the beams of light make themselves into an architectural screen and allow the audience to feel the screen tactually while interacting with the work. 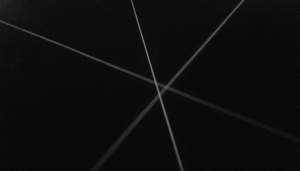 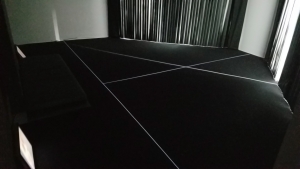 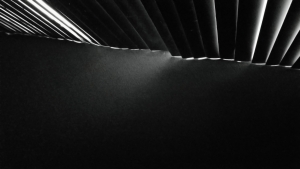 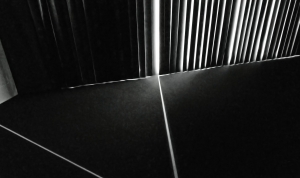 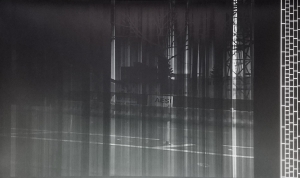 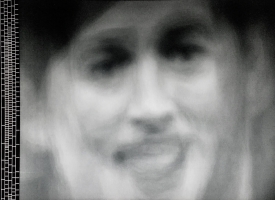 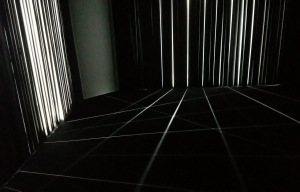