‘Night Cloud’ searches for a connection to boundaries of natural and artificial spaces. Roberts and Yoo embrace the concept of artistic transcendence through collaboration, synthesized through performance.

‘Night Cloud’ is a new media performance project featuring the work of new-media artist Sangjun Yoo and choreographer Daniel Roberts. Stemming from a shared interest in exploring visibility/transparency through movement of light and the weather system, we created a cloud environment inside a black-box theater setting, using four light projectors and a haze machine. Our process focuses on the intersection of new media and choreography and how both light and movement patterns can develop in the described environment. Our goals are to realize a collaborative performance that holds the integrity of our respective artistic mediums, gain a new perspective on dance-technology collaborations, and create an innovative digital performance piece.

To invoke the two-dimensional figure in three-dimensional space dynamically, I utilized multiple light projections of morphing geometric lines and planes that orchestrate and physicalize on a hazy stage, reveal or conceal the dancer’s movement to explore the vast range of visual effects that could be achieved through the spatial understanding.

As the performance progresses, the audience finds that four projectors are projecting onto the hazy stage. The audience not only perceive the mechanical medium on the stage, and the field of view relying on it, but also perceive a sense of the presence of themselves who look at the stage through the artificial lights. On the whole, audiences are interested in experience, not technology. They experience something delivered by media, such as feeling and deep impression, and enjoy the experience of immersive thought and feeling. In the present work, over time the audience realizes that light is not information coded for the representation of cinematic images, and that neither does it act only as traditional stage lighting. Rather, in an environment filled with haze that is tactually perceivable even from the audience seats beyond the stage, audiences become immersed in the performance, synchronizing their own visual and tactile senses with the light of the projector itself and with the deliberate interaction of the dancers’ choreography with light.

This collaborative work has the same concept as theater in that it provides immersion to people in a closed space. However, the moment the audience’s viewpoints move to the inside of the stage, the illusion becomes productive, breaking away from the area through acts that traverse multiple screens and view the same screen from different viewpoints and frameworks. Dancers conceal and reveal their bodies repeatedly under moving light and shadow, and this removes the magical moments of disappearance behind the screen or the sudden appearance in front of the screen. The movements of the dancers are very basic physical phenomena enacting common scenes with which everybody sympathizes. Here, the screen refuses immersion into illusion. The refusal of an illusion begins with knowing that the illusion is just an illusion and that there is another position on the inside of the stage from which to view the illusion differently. 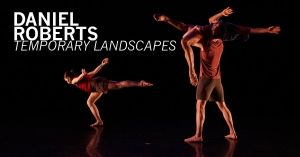 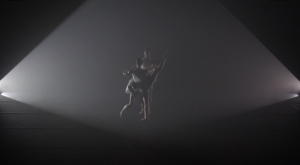 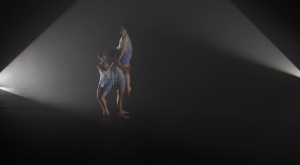 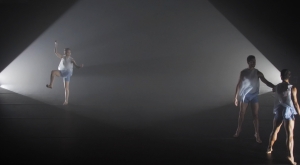