untitled [ ] utilizes images from Google Street-view, reforms the typical purpose of navigation or documentation use into an animation that has a nonlinear timeline. This video art considers the one-way interactivity of internet streaming as a communication barrier and thus attempts to realize the topological landscape of the city in non-linear time. The image-processing amplifies the transitioning matter that travels the boundaries of sites and resident’s cognitive attachments to it.

I employed Google Street View, a stream of informational images that exists around us as a material structure, like looped information, and this firm existence of the structure seems unconnected and unrelated to anything other than itself. I processed these Street View images using a customized video editing interface that sequentially overlaid each image over the previously loaded images while slowly erasing the previously loaded images in order. This video processing created a smoothly transitioning matter as fast-phasing images that travel along the route as if driving down the streets in one direction.

Additionally, the custom made software recalls a static image from the generated Street View imageries, then blends with the moving image in realtime amid fast-phasing transitions. The vignetted static street images appear sequentially on the screen as paused frames over the moving images. This implies capturing a moment of the journey as if taking a photo while driving down the road and passing places. I intended these paused moments to be seen as flashbacks while reclaiming the lost information from the street due to the directionality and speed of the desired travel.

For the second setup of this work, I have expanded the video to double the length of the original while maintaining the image’s proportion and ratio without mirroring or stretching. Then, I rendered the video in a seamless loop to be projected on two large cornered walls of a gallery. Due to its large-scale projection, the scale of the street image matched the life-scale and the perspectival sightline of one’s vision through the car’s side-window. 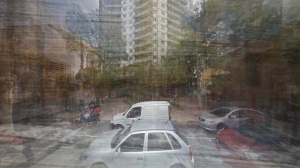 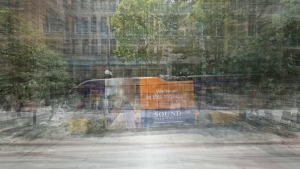 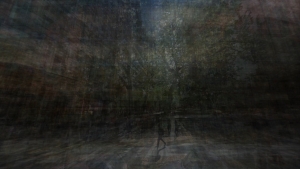 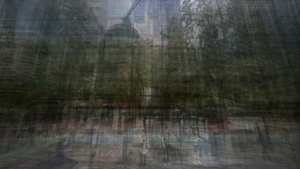 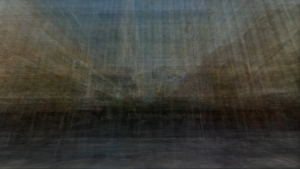 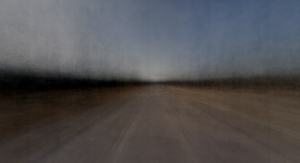