I hear a tree in the wind at night

The true method of discovery is like the flight of an aeroplane. It starts from the ground of particular observation; it makes a flight in the thin air of imaginative generalization; and it again lands for renewed observation rendered acute by rational interpretation. (Whitehead, 1978)

I hear a tree in the wind at night (2020) explores the correlation between technology and perception. The work sets out to reconstruct biological and geopolitical anxiety, by pulling out the vibrations and curves of organic life surrounded by infinite mechanical apparatuses. For this, the exhibition aimed for the sensory disagreement of signals in the semantic network of signs, ambiguous materiality in automated texts, noise in voices full of meanings, and ultimately disturbance itself.

I intended to design a system in which everyone can be a participant to operate and evolve my exhibited work. Although the exhibition is situated in a physical location and gallery space, visitors can access my work from all over the world via the Internet. This was progressed to construct multiple prototypes that involve a networked system with both physical and digital interfaces for a full-scale user-experience and user-interactivity with real-time data parsing and visualization of geolocational information, and found footage archiving using a database. With a plan to design a system as an entry point through which visitors can access my work using their smartphone’s internet connection and to collect visitors’ geolocational information as a core resource for the work’s operation, an interactive web-interface hosted on the Internet was necessary.

The digital screens realize movements at an unexperienceable distance, the impotence of imagined time-space that affirms only the beginning and the end of the event. In the data-aided digital screen, the reflections of traditional three-dimensional space are converted to electronic digital information and visualized in real-time. This finds its highest expression at the viewer-accelerated consciousness. When space-time is no longer experienced, the gap between the original and reproduction vanishes as everything rolls randomly past the car’s windshield. The visual composition aided by navigational information expands the visual perception into a simultaneous movement of departure in which images become temporal and spatial and then vitalized through the fusion and exchange of real-space parameters.

This project concludes with the representation of a vista consisting of multiple vectors, where one cannot experience the self. Due to the continuously moving bright-light from the ceiling, the exhibition space is in a flux of light and shadow. The shadow created against the displays, chairs, and the visitor’s bodies constantly appears and disappears. The visitors are in an ambiguous state between moving and remaining still and the mind drives this eerie sensation, conflicting with the bodily presence. 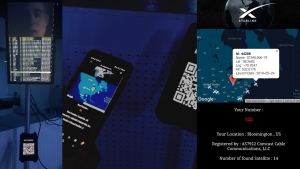 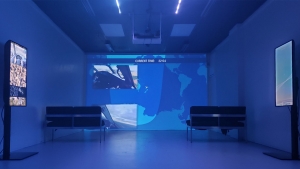 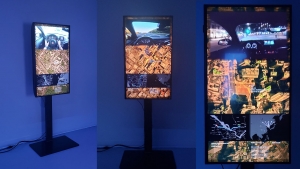 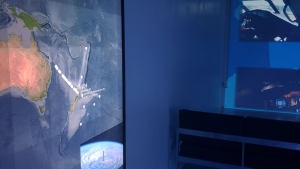 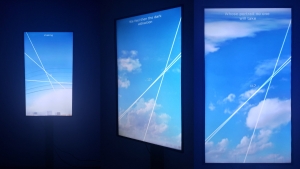 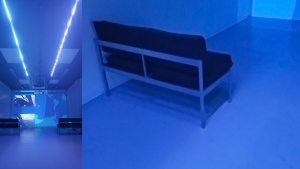 ‘I hear a tree in the wind at night’ – Solo Exhibition