I have nothing to say about anything at all

solo exhibition – MFA thesis show ‘I have nothing to say about anything at all’
live-feed TV signal, multi-projection, video art, sculpture, mixed media installation 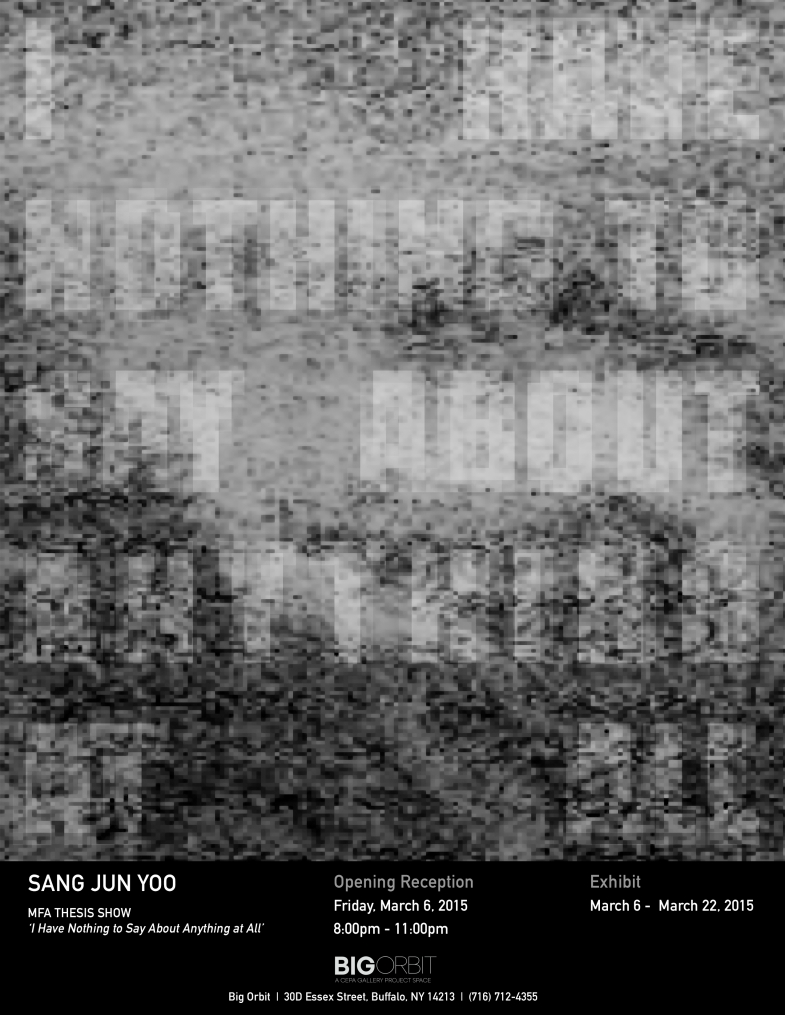 Imagine a world contained within six sides in which no light, sound or the passing of time exists. What is left is a black empty void of nothingness. Under such conditions, it would not be possible for any living being to thrive, let alone survive. -How I perceive life from inside a television set that is not plugged in, broken and/or neglected. As I walked up to the entrance of Big Orbit Gallery, the site of Sangjun Yoo’s MFA Thesis exhibition, I noticed how dark the space appeared from the outdoors. No light was being reflected outwards, or seeping out through the crack of the door jam, for the entrance had been blacked out with paint and heavy cloth. My immediate response when opening the door was that it felt like I was entering an alternate universe, when in fact unknowingly I was. As Maurice Merlau-Ponty believed, we are all embodied subjects, calling into question second, but first and foremost observing. As our bodies travel along a conveyor belt of time, we gaze out onto the horizon, not searching but living, breathing and thinking. Yoo’s interest in working with time-based media is associated with his childhood memories of sitting in front of the “big-screen” and being completely immersed in a world not of his own, but one that was desired. With sounds and images flashing quickly in front of him, and later on available with a click of a button or a touch, the sensations that were aroused could no longer be ignored. His installation, I have nothing to say about anything at all, possesses an essence of an action and response exercise that the spectator witnesses as they meander through the gallery space that is lighted by the limited capacities of technological devices. Yoo utilizes outdated forms of communication by manipulating their presence with newer forms of technology, calling into question the subjects you are viewing. Through the use of sound, light and image, the works call upon your notions, while informed interruptions occur in the message. Disapparition, is comprised of a larger than life black and white projection on the back wall that shifts through abstracted images composed of giant pixels. This work reminded me of paintings that use pointillism as a method of construction for the composition, where one has to give themselves distance from the work in order to fully capture the picture, and perceive the noise. Whereas drafted, dates itself to the radio and scanner era, or for myself riding in the car with my father, while desperately trying to find a radio station out in the countryside. This perception of mine further resonated with this piece by the still images that were collaged together in a video that were taken on the side of a major road and in the surrounding suburban neighborhood plotted with tall grass, trees, power lines and a radio tower. The images read as universal signs, familiar and quite common to the American landscape. But once again, I was removed from the precursory thoughts that I as the viewer was beholden to, by having to place headphones over my ears in order to hear the sound component, I was immediately transferred to yet another time and space. Across the way from the projection, two flat screens were mounted to the floor, several feet apart that showed the same video repeating, esc. The content of the video was a close up of escalator stairs moving, so as you became hypnotized by the repetition the mind created the sound associated with their movement, to fill the gap that was present. Behind the floor piece, on the wall there hung three works, iridescent, a vertical LED light sculpture (10”x48”x7”) that was positioned in between crossing, a two piece 15”x15”x2” masonite panel set, whose mono white pattern was shaped by an unknown action, and it’s remnants were on display, much like a 3-D contour map of mountains that form a straight line. These panels were only illuminated by the LED light, which cast valleys of shadows on the walls, creating another layer to the work that resided within the darkness. Last but definitely not least, in the middle of the gallery and on both sidewalls, rendezvous, a multi-media installation culls onto the uncertainty of the audiovisual data that you are being exposed to. Flashes of colored squares appear on the parallel sheer curtains that allow you to look past to see monitors with antennas. A midst the set up one faintly hears a beckoning of distorted frequencies that feed into the artificial space. The elements of this piece overlap in proximity of signals, as the digitally accelerated environment provokes one to interact, and not stay static. Modernity has been shaped by communicative inventions that have at times appeared to bring us closer together, while subconsciously they slowly tear us apart. American television and radio provide an illusion of a mirror that solicits your attention and desire to become what you’re not. Predecessors of video and glitch art, and makers of sci-fi films have presented valuable insight into what our society is capable of becoming, and for the detriment of known civilization what is already present. Yoo’s relationship to art and time-based media, pulls from the legacy of those working before him, like Nam June Paik and the minimalists of the 1970’s, as his work drifts between realities seen and unseen. Cultivating ideas around the connections between humans, objects and what the naked eye can not perceive, Yoo creates work that asks you to feel first and think second. With the poetic quality that is inherent within the installation, it permits you to discover new meaning from within everyday and historic imagery and materials. I would like to leave you with a few words that have inspired the transcendental nature of Sangjun Yoo’s work: “Only with eyes closed can we unfold the future, and with eyes opened we can conceive to enter it.”-‘On The Black Universe’ by Francois Laruelle